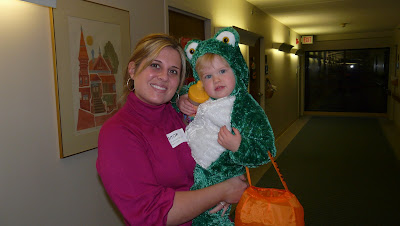 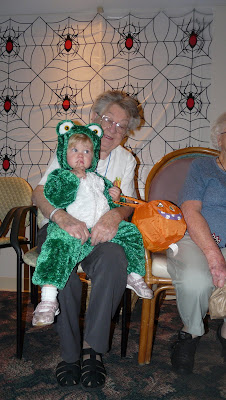 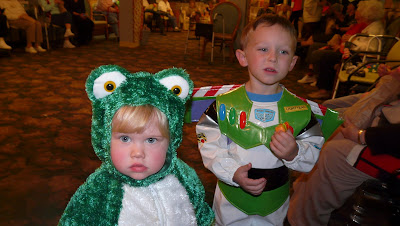 This past Monday, we went to Kevin's Grandma's Home's Halloween party. All of the residents had candy which they passed out to the little dressed up kids. Daphne went and got some candy but had the most fun passing out candy to other kids - this is NOT like her mom. I think I need to teach her better. And of course, she got to wear her Halloween costume again. Daphne and I also went to HallZOOween at the Cincincinnati zoo this past weekend and again got to wear her froggy outfit (but no pictures). She is getting lots of use from this outfit and having lots of fun wearing it.

Posted by Unknown at 8:26 PM No comments:

Let's see if this works.
Here's Daphne dancing in her favorite outfit.

Daphne dancing to Mickey Mouse from Denise McCabe on Vimeo.
Posted by Unknown at 9:40 PM No comments: 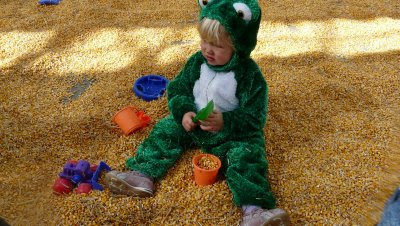 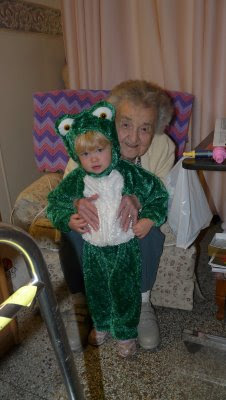 Two weekends ago we went up to Brunswick and visited my parents. Daphne got to share her Halloween costume. But she will not share her candy - just like her mom. We went to an indoor Halloween Funfest where Daphne (and Kevin) got to go through a blow-up Haunted House, play in corn (it's much better than playing with sand), make a necklace and a Halloween bag - which (sorry, Mom) is already picked apart. I think she had a good time. And of course - she likes wearing her Halloween costume - the froggy outfit.
Posted by Unknown at 9:06 PM No comments:

Fall seems to be filled with more activities than summer. Last weekend we went to the zoo and to Kevin's annual pharmacy pig roast (only one more left). Daphne got to feed the giraffes and was having a lot of fun until we were on our way out and she fell flat on her face. Her lip got a little (kind of a lot) bloody and she may be traumatized for awhile. All in all, she cried for a long time, got a fat lip and a scraped chin and has probably forgotten it by now. Which is good - because we are hoping to go back to the zoo again soon for Hallzooween.

Daphne on gorilla- October of 2007 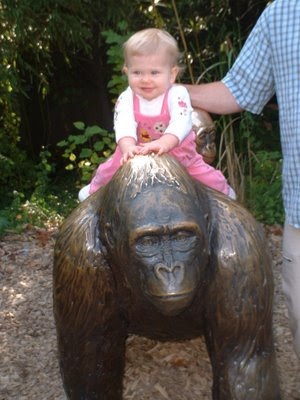 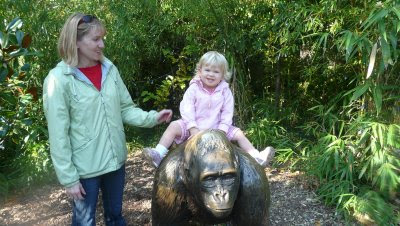 Daphne's new favorite activity - swinging. I think she would spend hours swinging if someone would push her. 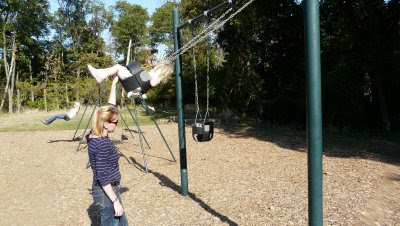 This week we went to the UC homecoming game. Who knew it would be 80 degrees and very sunny in the middle of October? UC won. Yeah! A lot of things have changed since Kevin and I were in the band. The "home" side has switched, the buildings around the field look very different and at the end of the game, the football team stood in front of the band and cheered while the band played. Wonders never cease. It was good to see a lot of our old band friends. It just seems like yesterday when I was playing on the field and now the band members look so young! And most of our friends have had or are having kids. Time moves on. 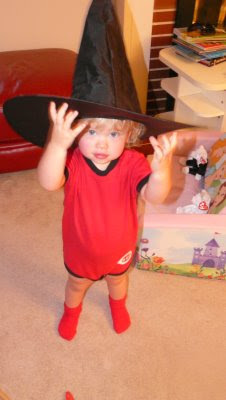 Posted by Unknown at 9:37 PM No comments: